While pursuing her graduate degree at the School of Fine Arts in Paris, Estelle Hanania spent her free time in the photo lab, experimenting with the large-scale color prints. At the same time, Hanania freelanced as an art director for Ogilvy, a post she left after graduation in order to pursue a career behind the lens. The payoff was immediate: a month after receiving her degree, Hanania won the photo prize at the 2006 Hyères Festival. Since then, her photographs have appeared in T magazine, WSJ, M le Monde, Air France magazine, Tank and Vice among others, and she has been commissioned by fashion brands including Hermès, Maison Martin Margiela, Issey Miyake and Cacharel. Since 2008, Hanania began several collaborations, one with choreographer Gisèle Vienne and another with artist Christophe Brunnquell on photo-performance projects under the name Hanania & Brunnquell. Her pictures have been collected into four books, and she been the subject of three solo shows in paris. and her last book just published by shelter press in september 2015 is entitled, happy purim. Today we take a look at her series called, Demoniac Babble.

I do not try to define the outlines of a practice or of my practice. If my work has a documentary approach, I would like it to be in Sergueï Paradjanov’s way, when he summons legends, visions and rites that he filters, personalizes and thus, displaces. Paradjanov is a magician of reality, he managed to mix imaginary, folklore and social realism.

The body plays a key role in my work. It is the archetypal common element. The body merges into the masses as much as it withdraws from it. Universal and singular are refered to at the same time, the body combines difference with resemblance, the extraordinary with the banal, and that makes it an endless source of inspiration. Identity is also a (photographic) subject I relish. The fact that I have a twin sister probably has something to do with it… Pictures of isolated individuals or groups of people say something about community, about tribes. They raise the question of the individual’s personal quest among the group and of the ways used by the individual to distinguish itself from apparent uniformity / similarity. The fetishist dimension of costumes unnerves this relational maze and such intertwining fascinates me.

To sum up, one needs a place, a date, and characters. Once these parameters are reunited, the frame is set and I can slide into it and let myself go as much as I can. This loss of ‘self’ is crucial for me, it allows me to exercise my gaze. I once came across this excerpt from a text of Jean Starobinski evoking the poet Philippe Jaccottet : “he does not obliterate himself from the subject, he does not absent himself from his world, he does not profess absolute anonymity — instead he persists, now freed from his own history, freed from the care of his own self, he can confront the world, the elements in a righter way”.

My approach of photography is structured around two axes that may seem contradictory: instinct and skill. A balance needs to be found between theses two ideas. An improvised precision, perhaps. To quote Jean Starobinski one last time, “the apparent paradox that associates ignorance and truth makes ignorance the receptacle of the most precious truth to the condition that nonknowledge remains perpetually disquiet and open to all the accidents of the world’s light”. I recognize myself in this approach.

To view more of Estelle’s work please visit her website. 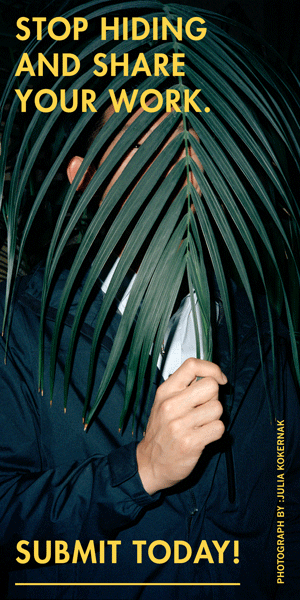