Nancy Floyd has been an exhibiting artist for thirty years. Her work has been exhibited in numerous venues including Solomon Projects, Atlanta, GA; Flux Projects, Atlanta, GA; the Atlanta Contemporary Art Center; White Columns, New York, NY; and the California Museum of Photography, Riverside, CA.  Since 2009, her work has been part of the Elizabeth A. Sackler Center for Feminist Art Archive, Brooklyn Museum, Brooklyn, NY.  Floyd has received numerous grants and awards including a 2014 John Gutmann Photography Fellowship Award and a 2014 Society for Photographic Education Future Focus Project Support Grant. Temple University Press published her first book, She’s Got a Gun, in 2008.

Floyd earned an MFA from the California Institute of the Arts, Valencia, CA. She lives in Atlanta and serves as Professor of Photography in the Ernest G. Welch School of Art & Design, Georgia State University.

She’s Got a Gun is a photographic exhibition by Atlanta-based artist Nancy Floyd. The exhibition comprises approximately twenty photographs from this series that has been ongoing since 1993. Coinciding with the exhibition is the release of Floyd’s book of the same title published by Temple University Press. Her book is the first to combine personal story telling with a visual history of women and guns in America, 1850 to the present.

The photographic series She’s Got a Gun comprises powerful, compelling images of her research on the topic of women and guns in three specific areas: pleasure, power and profession. Images of women in the military, Olympic event shooters, female police officers, women who own for purposes of self-defense and many others are included in the exhibition. Floyd, raised in League City, Texas, grew up in a popular culture ripe with associations with guns: cowboy and Indian games, plastic pistols full of candy and watching Gunsmoke on television with her family. She purchased her first gun in 1991, right after Desert Storm, largely as a way to connect with her brother who had wanted to be a gunsmith. He died in Vietnam when she was 12. Initially, Nancy was afraid of the gun, but over time she began attending Ladies Night at the local shooting range and befriending other women who shared her interest. The exhibition of photographs explores fifteen years of her experience in the gun world. 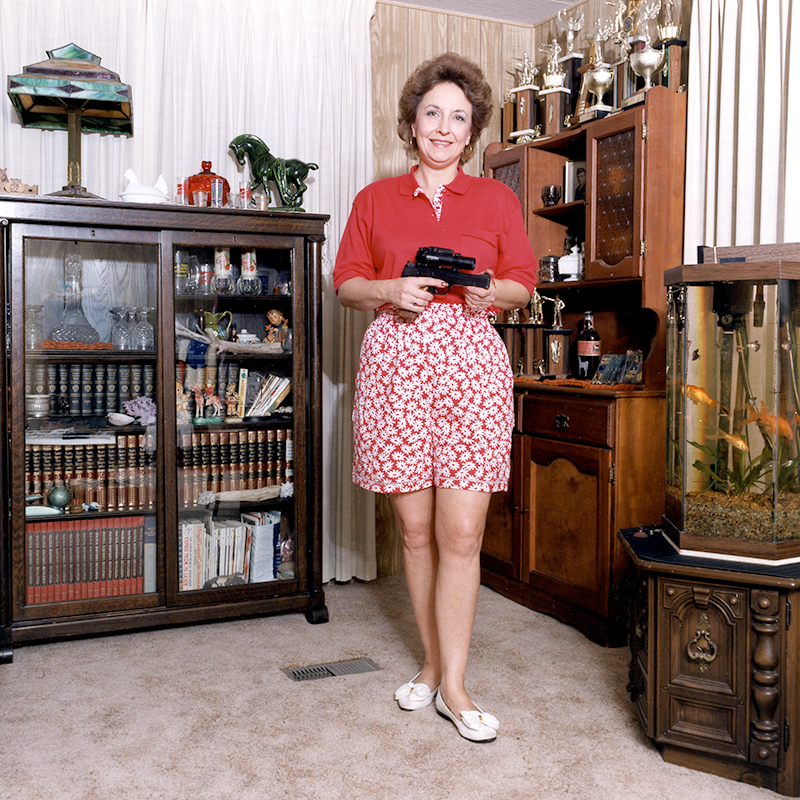 Maggie C. Brown in her garden with her Remington Single Shot .22, Farmington, Georgia, 1997.

Clair Sherwood with her Guns and her Grandmother’s Quilt, Atlanta, Georgia, 1997.

10.9 (a perfect score) is a collection of intimate portraits of elite female competition shooters.
For me the beauty is in the pause—the in-between time—when shooters assume a posture to slow their heart rate, steady their nerves, or to simply rest before the next shot

To view more of Nancy’s work please visit her website.