Jordan Baumgarten is a photographer and educator based in Philadelphia, Pennsylvania. Jordan received an MFA from the Rhode Island School of Design and a BFA in Photography from the University of the Arts. Informed by his own lived experiences, his projects walk the line between documentary and personal narrative. His work touches on ideas of race, socioeconomics, dissonance, violence, love, loss, and fear within the urban environment. In 2013, he published his first monograph, Briar Patch, with Parts and Labor Books.

Briar Patch is about the dissonance felt when your home is somewhere you don’t belong. The images explore a life and a relationship in the context of an at-times violent neighborhood, and the anxiety of that looming violence coming into the home.

After the Storm, 40th and Spring Garden, Philadelphia, PA 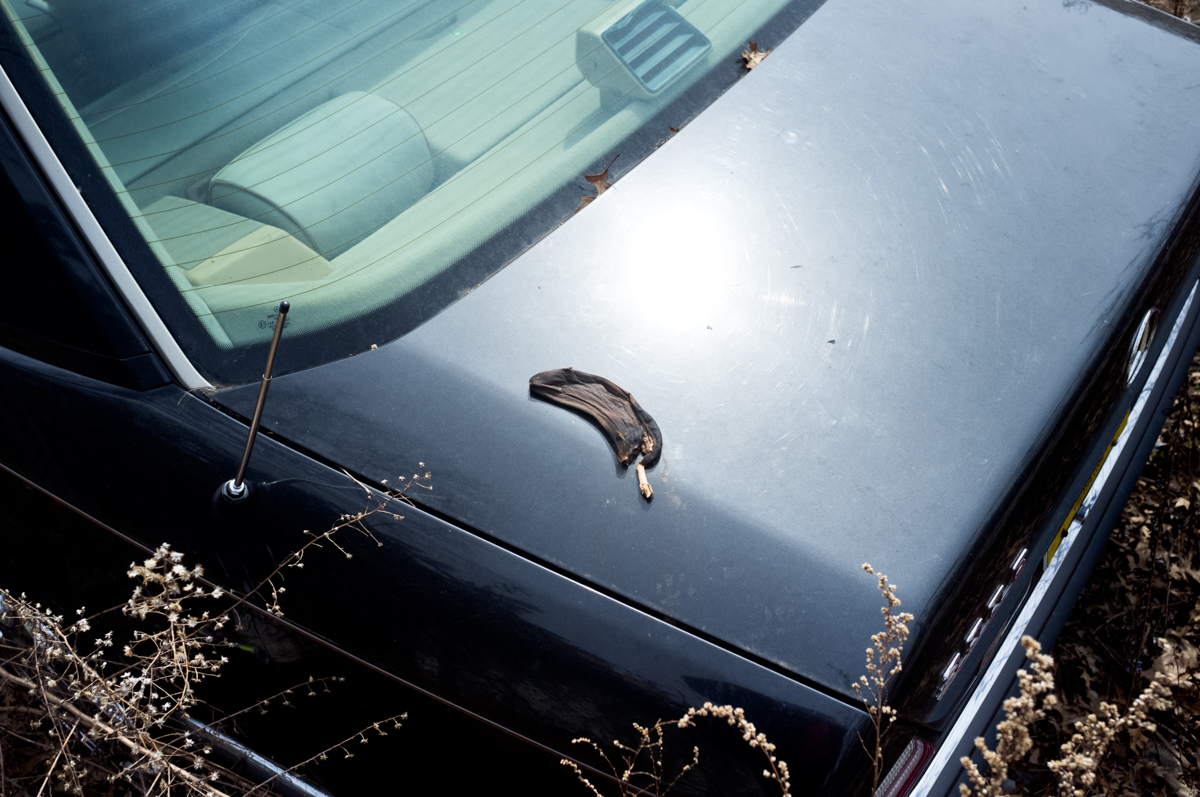 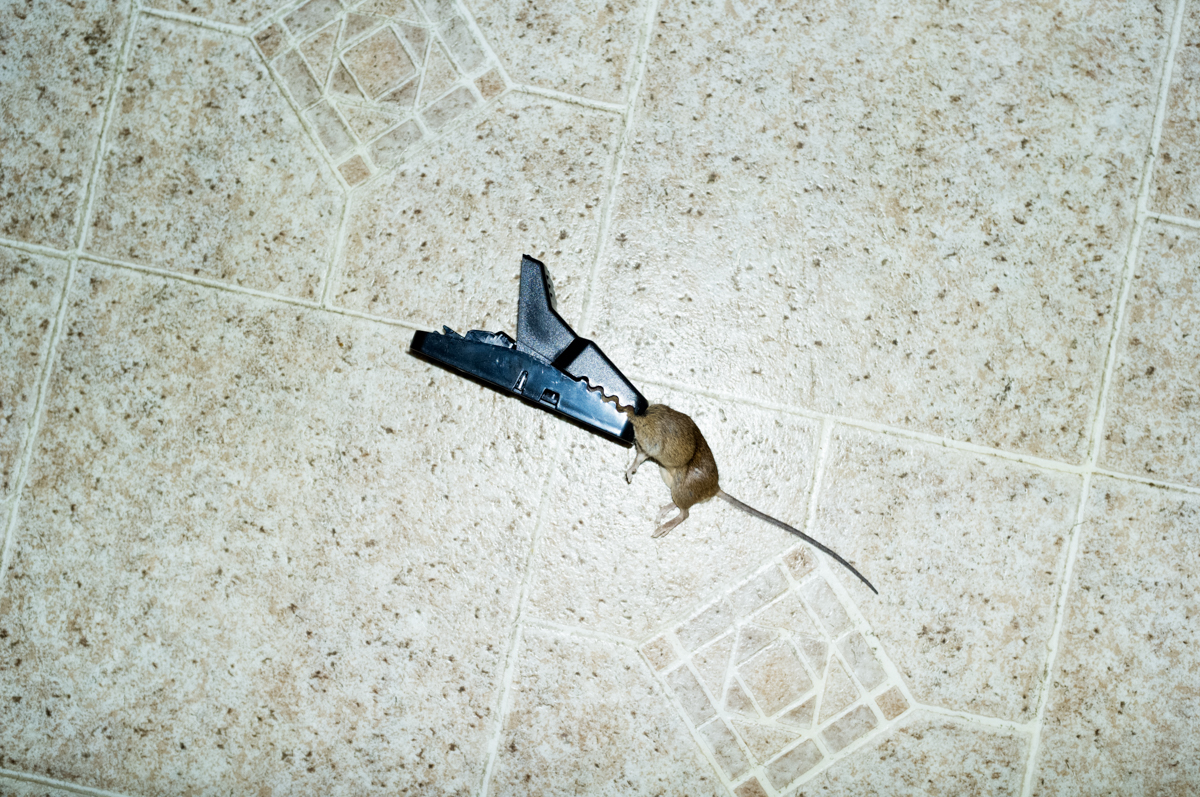 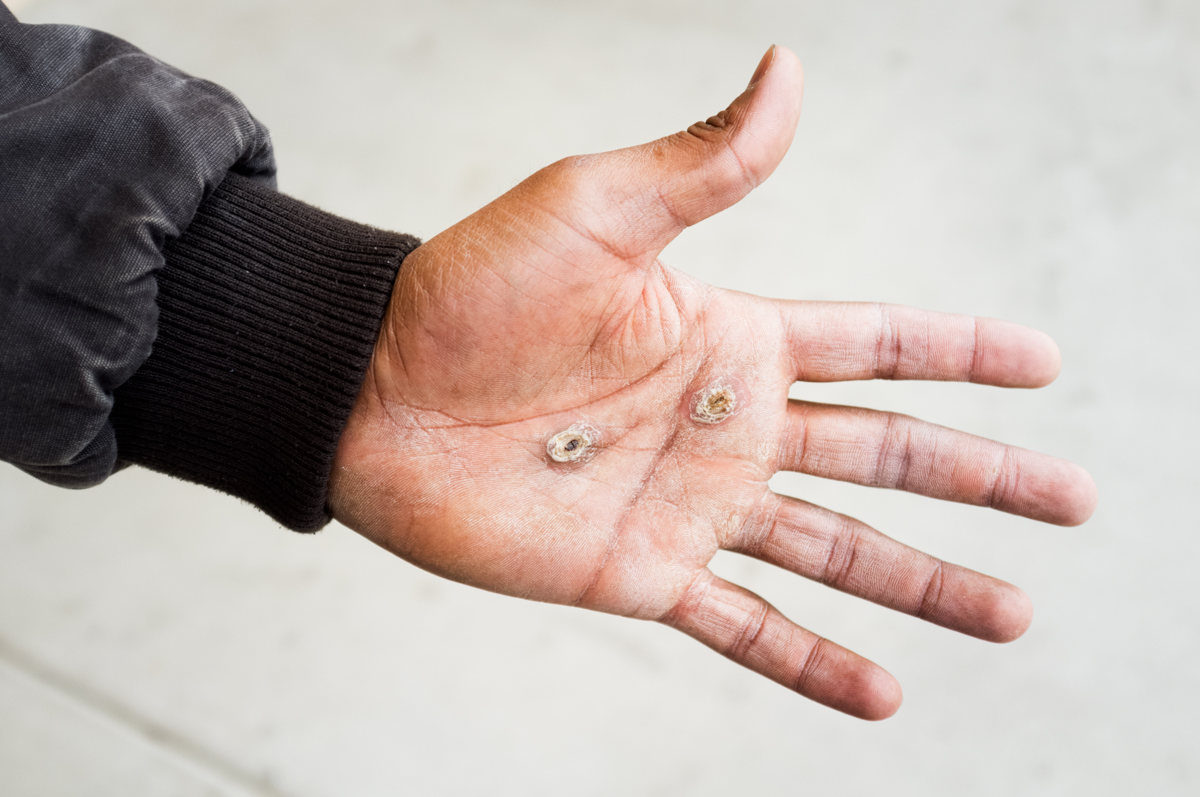 The dog who catches the car gets killed sometimes

My wife Anne and I have lived in the Kensington section of Philadelphia for the past couple years. When I first started making work in this neighborhood, I was incredibly timid. Initially, I was shocked by what I saw going on: drugs, sex and violence were openly sold and exchanged on the streets, and while the police had no apparent interest, I was curious about all of it. But I was afraid to get close. I was afraid to engage with the people in the neighborhood. I’d show the work to my friends, and one friend in particular who was very good at pushing me. He encouraged me to find my “limit” and test my boundaries. What was too much? What was too close? What made me uncomfortable? How did that affect the work? All excellent questions. But inevitably they lead to others: What happens when you do cross that threshold? How far is too far?

I’ve run towards gunfire, nearly been mugged, and almost shot people in self-defense. I’ve seen beaten, raped, and left-for-dead hookers, and I’ve seen junkies run off while I stopped one of their friends from aspirating due to an overdose. I’ve made all these photos and with each frame I would ask myself what my friend asked me, “Had I gone too far?” Each time I answered myself, “No. Move on.” In fact, each time I didn’t lose my shit after one of these episodes, I rewarded myself with water ice on the walk home. As far as I was concerned, I had no limit. I kept daring myself to go further and prided myself on my newfound ability. I could handle anything.

In August of 2014, I was out making work and I met a woman collecting trash and debris off the street for an art project. We got to talking about the neighborhood, as she gingerly swung her bag back and forth. Soon enough, the bag struck my hand; I felt a sharp pain, and I began bleeding immediately. It turns out that she was collecting used heroin needles, and one of them had pierced the bag and stabbed me. I immediately went to the hospital, on the verge of vomiting every time I realized the enormity of what had happened and what that might mean for my future.

The ER doctors gave me Immunoglobulin for Hepatitis B and started me on two HIV anti-retrovirals. I started going to an Infectious Disease Specialist and had to remain on the HIV anti-retrovirals for two months. I still have to get tested every two months, and each time, I can barely sleep until I get the results. To top it all off, the HIV meds may have permanently damaged my kidneys. All of the sadness and desperation I was pointing my camera at was finally dumped on me, and I was terrified. Not only was I becoming a part of that narrative, but that narrative had consequences. That narrative became real in a way that photography can only attempt. My limit had found me.

I’ve been in a place of transition for the past ten months. Since the incident with the heroin needle, I’ve almost stopped making work in my neighborhood. I pulled back. I felt scared. I felt stupid. But, most importantly, I felt selfish. I’m lucky to have the support of an amazing wife, but had I taken advantage of that? Was I so focused on making this work and how it affected me that I had completely disregarded how it might affect her? I was out there taking risks and handing my life over to chance in a way that a person only living for himself might. But I shouldn’t have, because I’m not. I’m connected to another person and she now has recurring nightmares that I die. That isn’t right; it shouldn’t be that way. I want to be a better husband for her. I want to be a better source of support for her, not the source of late-night torment and daily anxiety.

In January, a dear friend and mentor’s wife passed away after a long battle with cancer. Anne and I looked at each other nearly the entire memorial service. We held hands all the way back to Philadelphia. We got home, laid in bed, and held each other for the rest of the evening. What would we do without one another? No photograph is worth putting her through that. No sought-after experience is worth making her a widow.

About a month ago, and I’m really not sure why, I decided to try my hand at making some work in the neighborhood again. An interesting thing happened: I almost took a photo. This is unusual, because I usually always take the photo. I don’t allow anything to stop me. But, this time, rather than think about the image, I thought about the repercussions of making that image. The potential subject of the photo, a guy fucking a hooker outside, surely would have gotten angry and come after me. This could have ended one of two ways: I get my ass beat or I shoot him to save myself from imminent death. What is the point of knowingly and willingly creating a violent and aggressive confrontation? Is this the reason I make work?

So I walked away. I went home. I went home to my wife and dog where things are beautiful. I went home where things are beautiful and I feel love. I felt that love and I cried. The armor that I developed to walk around and guard against all the horrifying shit I exposed myself to and conditioned myself against – that armor became too heavy. The ghosts I carry around with me, of things I’ve seen, photographed, or participated in, became overwhelming. I realized that I couldn’t keep walking around like that. What does it prove? What does it accomplish?

I can’t help but think, the farther I tried to push past my limit, the farther I strayed from the person I used to be. I grew a thick skin, necessary for survival, but I lost my compassion – compassion that was previously integral to my work. (When I was younger, I spent time in Kentucky documenting rural poverty in a former patch town. I photographed hundreds of foreclosed homes during the 2008 housing crisis.) The person who made that work didn’t exist anymore. Searching for my “limit” turned out to be a fucked up game, each step deeper represented nothing more than a notch in my belt. I learned that I want my work, and my life, to be about more than that.

I walked around making these photos like they made me tough, like they gave me some sort of warped street cred. At the heart of it, that’s not the person I am. True bravery, I’m learning, is about embracing emotional vulnerability. I have so much love and I need to allow that to take over. I need to reteach myself how to be more loving with my work, through my work.

Reevaluating my priorities has taught me that there are other ways to put myself out there that has nothing to do with exposing myself to the actual, physical harm that comes from what amounts to self-destruction. It wasn’t about allowing the work to evolve; it was about allowing myself to evolve. With that, for the first time, I feel as though I’m honestly able to answer that obnoxious grad school crit question of, “What’s at risk here?”

To view more of Jordan’s work, you may visit his website.