Thad Russell is a fine art and editorial photographer whose work examines contemporary American life and landscape in all of its beauty, perversity and pathos. Born and raised in suburban Boston, Thad is a graduate of Stanford University and the Rhode Island School of Design (RISD), where he received his MFA in photography in 2006. His work has been published in the London Observer, the Los Angeles Times Magazine, New York Magazine, and the Photo District News Annual. His national exhibition record includes Fruitlands Museum, the Griffin Museum of Photography, the Houston Center for Photography, the Photographic Resource Center, and the Vermont Center for Photography. He lives in Providence, Rhode Island with his wife, Josephine Sittenfeld, and their two children. He has been teaching photography at RISD since 2007.

This series documents my parents’ lives as my mother struggled against and finally succumbed to cancer. For two years, I spent much of my time with her and my father in their northern Vermont home helping them deal with a unique period of challenge and fear. With their consent and collaboration, I tried to record and make sense of a dark time. The result is a body of work that is not a literal, linear journalistic account of what happened but rather a personal, subjective diary of how this time and place looked and felt to me.

In her last few years, my mother faced challenges above and beyond just fighting cancer and dealing with its treatments. Radicalized in the 1960’s and 70’s, she and my dad were devout leftists, and had championed an alternative, back-to-the-land lifestyle for over thirty years. They grew most of their own food, and lived “off the grid” in a hand-built house that got its electricity (when they were lucky) from the sun and the wind. They actively worried about the state of the world, and were particularly concerned about the current political and environmental trends in this country; their simple, organic, less-is-more lifestyle was their answer to what’s wrong with the world today.

Mom on the phone, Vermont

My parents’ 35-acre compound was supposed to be a refuge, a place separate and protected from the evil and disease of the modern world. It was designed to be a place to where we could all retreat when the shit inevitably hit the fan, when the long-prophesied and always-imminent economic and ecological disaster of Man’s own making finally came home to roost. The garden, the root cellar, the well, the solar panels – all this made it a self-sufficient place apart, a lifeboat of sorts. It was always supposed to protect us from crisis. What we never planned for, what we never expected, was that the biggest crisis in the life of our family would end up playing out there, in the lifeboat itself.

The backdrop is Vermont’s rural, remote Northeast Kingdom, whose long, gray winters are a mixture of beauty and misery. It is a special place, one that has long-attracted those who want to live on the land and in concert with the seasons. It is a place whose harsh climate builds character and whose breath-taking landscape is a character itself. As my family’s drama unfolded inside of our house, I often looked out, and was struck by how frequently Nature’s myriad moods mirrored my own.

This story is also about me: a prodigal son who returns home after twenty years away to reconnect with, confront, and document a family in crisis.

Can you go home again? Sometimes, whether due to fate or necessity, the answer’s yes. You need to.

sunflowers after a frost, Vermont

AB: I understand you spent many years of your life working at various ad agencies. How has their ideology impacted your current photographic practice?

TR: I think it’s easy to condemn advertising as crass, manipulative, and possibly immoral, but I don’t really feel that way. I worked in the advertising industry for about a decade and a half, and I mostly really liked it. I worked with some wonderfully talented people and I learned a lot. One thing I learned was that great advertising usually shares three key elements: beautiful craft, a strong idea and a message that makes people feel something. I think successful art projects often share those three elements as well; they’re beautiful, conceptual, and emotional.

If I had a problem with advertising, it was that the process, to me, felt fundamentally inauthentic. It’s really a type of fiction writing. As an art director, I was tasked with “making things up,” and that wasn’t easy for me. My creative spirit doesn’t really work that way. I’ve found that my strongest artistic impulse is all about receptivity and response, not wholesale fabrication. As an artist, I try to put myself in a place where I can simply respond to light and life, and make pictures that are honest, personal, real and resonant.

Mom at the window, Vermont

AB: The advertising world constructs highly idyllic expectations of personal lifestyles. How does your series, Northeast Kingdom, address ideas of family and sanctuary through the photographic medium?

TR: My parents had strong ideas about how they wanted to live, and they built a life and lifestyle that was consistent with these ideas and values. In short, they built a life that was personal and idyllic to them, even if it is a lifestyle that is rarely portrayed in contemporary advertising. My parents’ home and land was designed to be a refuge, a safe place that would protect them from the evil and disease of the modern world. But the tension in my series is the unexpected disruption in the form of cancer, chemotherapy and death that ruptures my parents’ utopia. This is the stuff that most advertising steers clear of. It is too real, too heavy, too difficult. 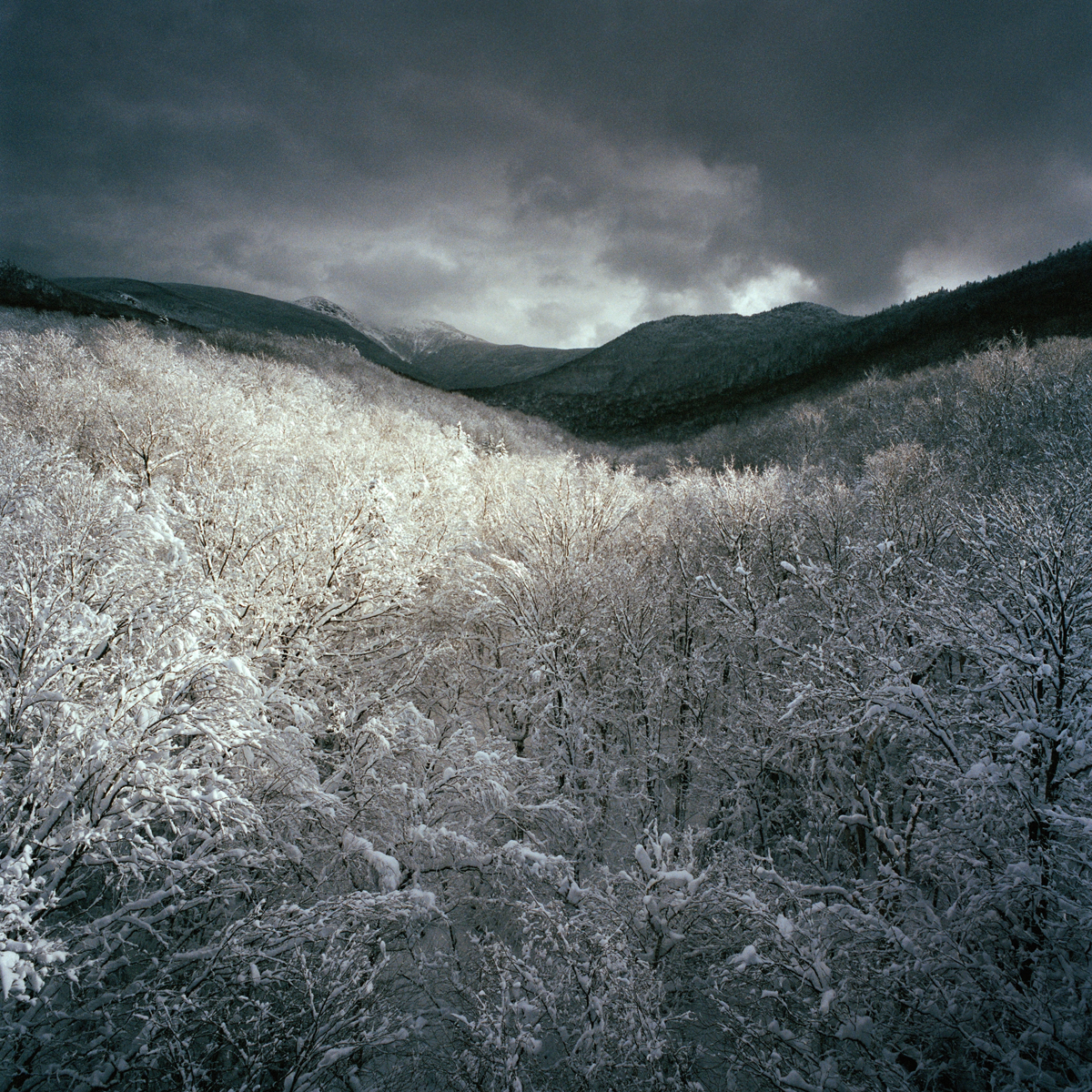 AB: How does intuition and performance come into play when photographing your parents?

TR: If I understand the question correctly, I would say this: my method of working is all about intuition and not at all about performance. I’m not a director and I don’t want to be one. I’m not comfortable telling people where to stand or look, or what to wear, or what to feel. I’m trying just to be present and open, and to put myself in a position where interesting and important things happen in front of my lens. That said, I do realize that a camera can and often does change people’s behaviors, and that there may be some conscious or unconscious acting that happens when people feel like they are being observed.

AB: Photographing family members during an emotional hardship can, at times, feel incredibly delicate and intrusive. As a son and an artist, what was at stake for you while making this project?

TR: What was at stake as a son and an artist? Everything! This was truly the hardest thing I’ve ever done. It was delicate, complicated, stressful and scary. First and foremost, I wanted to be a son, a supportive and loving son. My parents were going through hell, and I wanted to be with them to help them through it. But I also wanted to make work about it all, and they both understood and supported that idea. Weirdly, I think turning this ordeal into a collaborative art project made the whole experience a little bit easier for all of us. My Mom would be sitting in a chair with in a chemo ward with an IV sticking out of her arm and she would ask me, “Did you get the shot?”

AB: At the time, did you share any of these photographs with your parents, especially your mother?

TR: I did. The first time, it was a grad school exhibition in Providence. My Mom had finished her chemotherapy and was in remission, and she and my Dad came down to see the show. I was really afraid of what her reaction was going to be. When I asked her, she said, “It’s not as bad as I thought it was going to be.” The following spring, after my Mom died, I showed a much larger edit of this work for my Graduate Thesis Show. My Dad came alone this time. He was still in mourning and shock, but I think he was deeply moved by the pictures.

AB: You recently completed a collaboration with your wife, Jo Sittenfeld, capturing the simultaneous birth of your son and death of your father. Can you speak about working with your wife through these eclipsing life events?

TR: It was great – and really hard, too. My family was going through yet another difficult passage, and we were all pretty stressed out. It was my wife, Jo, who suggested that we take pictures of everything that was happening to us. I’d be rushing out the door to meet my Dad at the emergency room for the eighteenth time, and she’d say, “Don’t forget to take your camera!” Again, the art making was weirdly therapeutic and helped us get through it all. I also think we also made some honest and powerful photographs. We shared these at a joint artist talk recently, and were struck by how many people responded to –- and thanked us for — our story.

To view more of Thad’s photographs, please visit his website.