A native to South Carolina, Eugene Ellenberg uses image­based media to explore obstacles of intimacy as experienced throughout the human condition. His own fears, failure and wonder inform a creative inquiry into private and communal spaces to unveil vulnerabilities, address hesitations and encourage curiosities. Ellenberg studied at Clemson University in Clemson, SC and is currently an MFA graduate candidate at the University of New Mexico in Albuquerque, NM. His work has been published in Lenscratch, Slate Magazine, CNN World and One, One Thousand Southern Photography Magazine. He has participated in group exhibitions at the Workhouse Arts Center in Lorton, VA, Lee Gallery in Clemson, SC, SPE National in Baltimore, MD, College of William and Mary in Williamsburg, VA, SCA Contemporary, Clinton Adams Gallery and Inpost ArtSpace in Albuquerque, NM. He has presented at the SPE Southwest/West Regional Conference in Joshua Tree, CA, Coastal Carolina University in Conway, SC, Anderson University in Anderson, SC and Lander University in Greenwood, SC. He is a recipient of the Howard L. Franks Memorial Fellowship through a collaboration of the UNM College of Fine Arts, UNM Department of Art & Art History and the Zia Trust.

These images are the result of my curiosity and desire to be close to my father by addressing the walls of intimacy, transparency and understanding that I couldn’t penetrate while he was alive.

While visiting my parents in the fall of 2010, I photographed a napkin on which my father had inscribed two Elvis song titles, ‘In My Father’s House’ and ‘I Was the One.’ This small note was an insight to the private introspections of my father, the intimacy of which motivated me to investigate our relationship through the medium of photography. I expounded upon this by documenting various elements of our home and eventually asking others in my family to sit for portraits and to participate in constructed narratives. The majority of these images were captured using a large­format camera requiring a slower, more meditative process of photographing my family members while also conveying the quiet, unaffectionate tone of our relationships at that time. These images blurred the lines of what I recalled, what I wanted to admit and perhaps what I wanted to see. 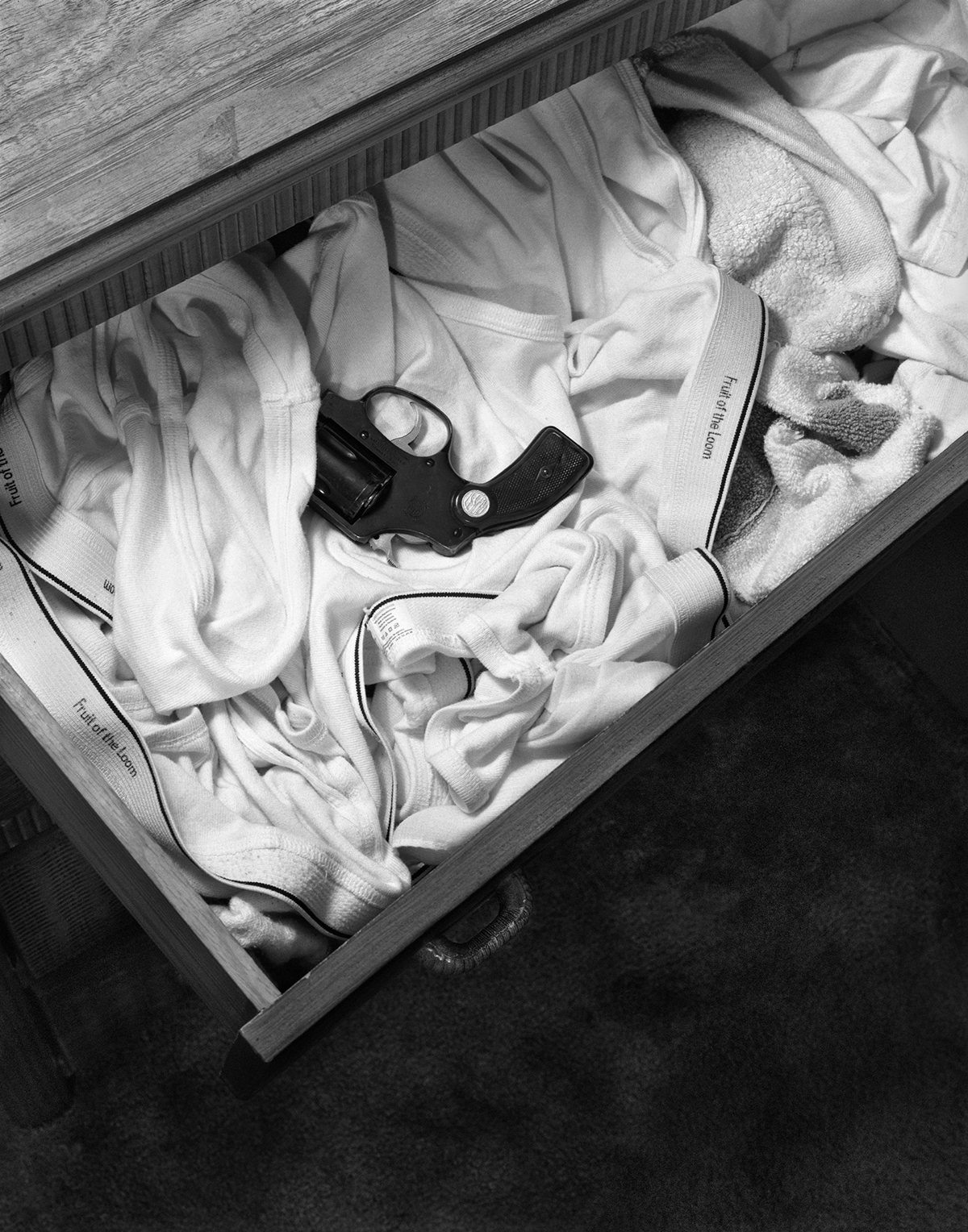 On July 26, 2013 my father was diagnosed with terminal cancer that had already spread to his bones. He was with us for seven days after the diagnosis. In his last days of consciousness, he began to lose touch with the world. Gripped by a sense of urgency, I acted on the desire to preserve these last moments in the time we had remaining. In those final hours, I grappled with my own disconnect as I slipped between the roles of active participant and documentarian. Although I had other photographic formats available, the phone camera became a discreet device of capture that allowed me to document without overly interfering with this fragile experience for myself and my family. These small images are fleeting yet also very intimate, showing my family engaged in an affection that we’d never allowed ourselves to express before.

Even now amidst other seemingly unrelated projects which I am currently exploring, the permanence of losing my father and unresolved questions continue to surface. Most recently, I re­examined an old color negative which I had then overexposed and at first glance assumed was void of any image. What I found upon finally scanning the negative was a portrait of my father which I had captured just after he passed away. What was initially a failure became a sort of digital resurrection and reminder of my father’s ongoing presence in my life and work.

To view more of Eugene’s work, please go to his website.