Rachel Stern (b. 1989, New York City) is a photographer whose work challenges conventions of beauty and promotes escapist, constructivist fantasy. She received her BFA in Photography and the History of Art and Visual Culture in 2011 from the Rhode Island School of Design and attended the Skowhegan School of Painting and Sculpture in 2014. Stern has exhibited works at Daniel Cooney Fine Art, Invisible­-Exports, Pioneer Works, Northern­Southern, and Humble Arts Foundation’s 31 Women in Photography at Hasted Kraeutler. Her work has been featured in BOMB, MATTE, Blink, Still,Vice, and Art F City.

James as Ophelia, Rachel Stern in collaboration with James Lyman

Rachel Stern makes photographs that translate the histories of images, power, and beauty into an amalgamated queer-washed iterations of the originals. Similarly the poet, Paul Legault, is interested in translation as a generative practice for creating original works of writing and art, i. e. rewriting as a form of writing. Legault often reworks classic texts; in this case, “It’s not that it’s so hot the flames that take everything, take everything.” is an English-to-English translation of Walt Whitman’s “Not Heat Flames up and Consumes.”

NOT heat flames up and consumes,
Not sea-waves hurry in and out,
Not the air, delicious and dry, the air of the ripe summer, bears lightly along white down-balls of myriads of seeds,
Wafted, sailing gracefully, to drop where they may;
Not these—O none of these, more than the flames of me, consuming, burning for his love whom I love!
O none, more than I, hurrying in and out:
—Does the tide hurry, seeking something, and never give up? O I the same;
O nor down-balls, nor perfumes, nor the high, rain-emitting clouds, are borne through the open air,
Any more than my Soul is borne through the open air,
Wafted in all directions, O love, for friendship, for you.

Here is what Whitman meant to say were he a gay man living in 2016:

It’s not that it’s so hot the flames that take everything, take everything.
Having sex doesn’t change the ocean.
The customs agent where the air meets outer space is a fire caused by entry.
If you’re a small object, things burn up.
I’d rather burn down, than burn up in, the sky.
I’d rather evaporate — say, if I were made of water, the way you are.
Like a newly launched satellite, I’d do anything to show you your own human grace. Surprised by how suddenly the sail lifts behind you, how clumsily your overalls slip to the ground, how gracefully you stand there and step out toward me like a suddenly de-suited astronaut.
Tell me again, love-commodore, and then stop telling me again: “We drew fruit from the forest like a pen draws ink.”
We drew a bath for trouble and listened in in it.
Like a rabbit, I’m either in a hurry or a curry. The air tastes delicious. I want to say that it smells like semen, but I don’t.

The above poem previously appeared as a wall text designed by Joseph Kaplan in Rachel Stern’s ‘LOVE 2016’ show at The LeRoy Neiman Gallery.

Sadio with Oranges and Flowers

James as Salome, Rachel Stern in collaboration with James Lyman

Aquanette and the Bounty of the Sea 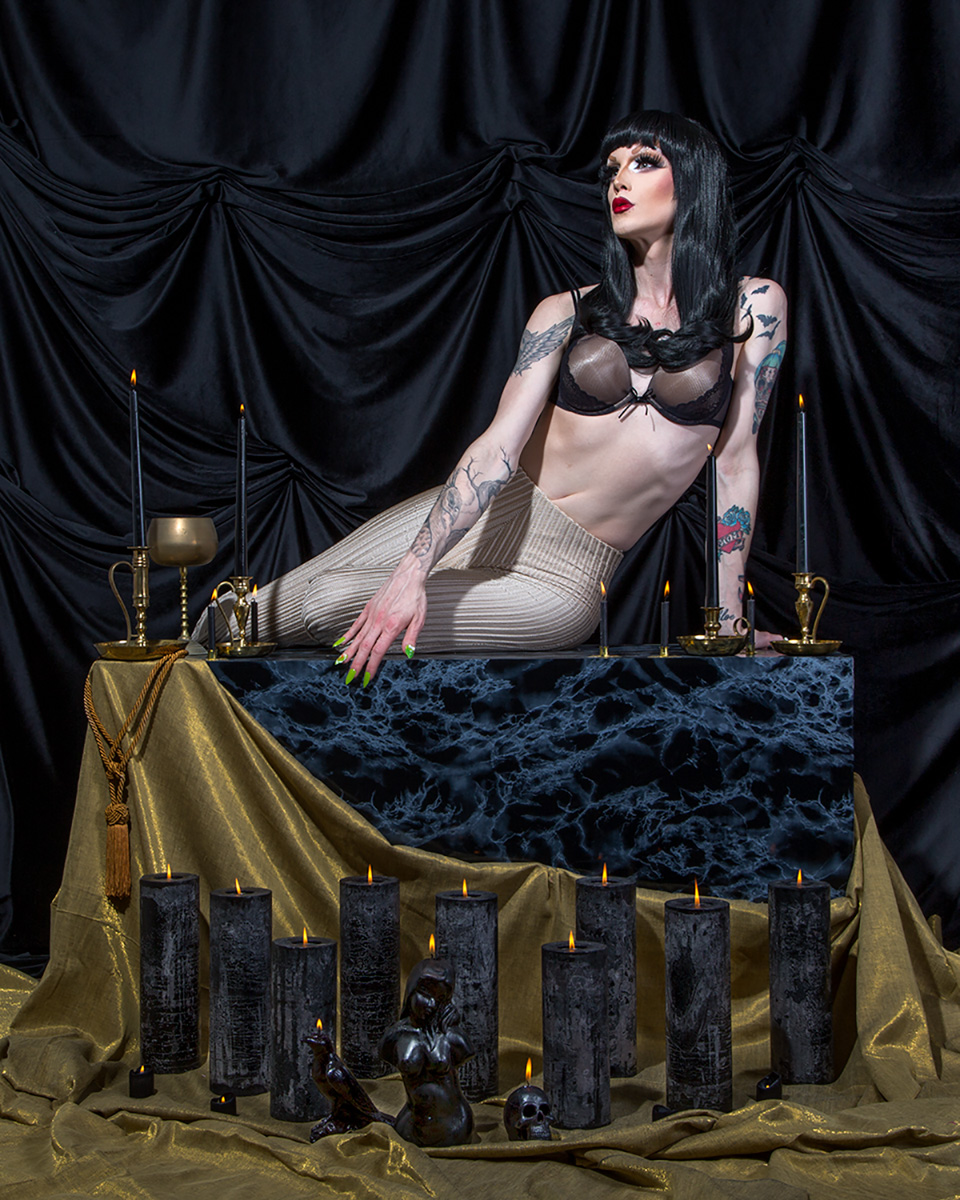 James and Ari as Vestil Virgins, Rachel Stern in Collaboration with James Lyman

To view more of Rachel’s work, please visit her website.