Melanie Eclare is a  photographer based in the south west of England,  currently studying for an MA in Photography at Plymouth University. Her photographs have been extensively published in the UK and internationally in books and publications.  As one of the leading UK garden photographers, Melanie has worked for the Saturday and Sunday Times, Saturday and Sunday Telegraph, U. S Garden Design Magazine, World of Interiors, Country Life, Country Living, Gardens Illustrated and House and Garden Magazine.  Gardening editor and photographer for Red Magazine, she has also contributed to many books as well as having her own books published by Quadrille, Kyle Cathie and Weidenfeld and Nicolson working alongside writers such as Elspeth Thompson and Tom Petherick.

Melanie has recently taken a new direction with her photography.  The broad theme of her work is an exploration of Nature Deficit Disorder.  This describes the current divorce between human and habitat;  an alienation from nature that negatively affects children and adults alike.  Ever increasing screen time and over protective or dysfunctional parenting  alienates us from an innate sense of place within the rhythm and cycle of life.  This is an issue effecting many of us and will  continue to become more of a a challenge for the new generations to come.

Allied with this exploration is a search for meaning, questioning  what it means to be part of the anthropocene generation.  We are the ones living in a moment in deep time when more damage has occurred on the planet then ever before,  the effects of which will take millennia to re-balance.  On a personal level this bigger picture imbalance is reflected in the prevalence of intergenerational trauma felt on an individual level.   Melanie is looking beneath the immediately visible, at deeper layers of discontent that exist beyond surface narrative and stripping away the mask to reveal autobiographical details hidden within the context of her images.

After the Fire series was made after the devastation of wild fires in northern California last September 2015.  The resulting work reflects a narrative revealing itself right now; referring to the conditions that define us as the Anthropocene generation.  We are the ones who are changing the earth so radically that more damage has been done to the environment in recent years than any other time.  Many believe this constitutes a new geological epoch as distinct from the Holocene.

Our negative influence will remain a major geological force, perhaps for millions of years to come.  For those of us aware of this, there is a sense of living in two or more temporal scales simultaneously; a kind of ‘out of jointness’ provoked by Anthropocene awareness.

My work speaks of this ‘out of jointness’ and a sense of psychic or existential distress caused by extreme environmental change, both at a personal and global level.  These fires coming after five years of extreme drought in California left the land savagely altered.  The ensuing loss of solace and sense of self in relation to the land may have a profound effect on a community after environmental devastation such as this and has been suggested might bring on an emotional state known as ‘solastagia’; a kind of homesickness felt when one is still at home.

I was drawn to the community on Cobb Mountain, Lake County, California to make work at this moment of trauma as a visceral response to a landscape I know and love and to friends who live here.  After the Fire is my personal response to the aftermath of such loss. It does not document my own history or land yet it expresses a heart felt desire to bear witness to these conditions and feelings of ‘solastagia’ and what it means to be part of the Anthropocene generation. 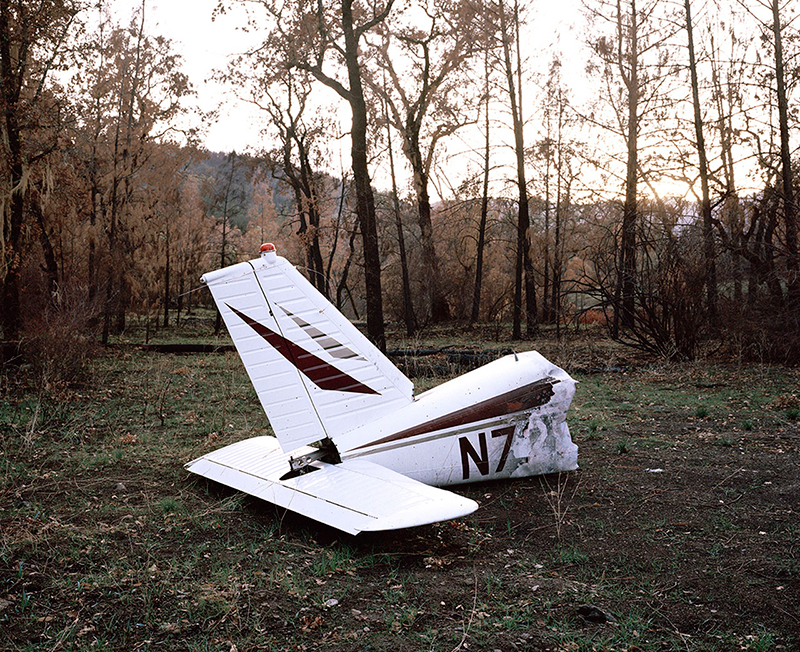 To see more of Melanie’s photographs, please visit her website.