Megan E. Doherty (b. 1981) is an award-winning documentary photographer. She received her PhD in the philosophy of religions from the University of Chicago in 2010.

Back of the Yards

For over three years, I have documented the last remaining member of a tiny street ministry that tends to those involved in, and victimized by, gang violence on the South and West Sides of Chicago.

Jim Fogarty, known affectionately as “Brother Jim,” wears a hand-sewn habit made out of scraps of denim, now tattered after over 30 years of use. That’s how long he’s been traversing the dangerous streets by foot, carrying only rosary beads to pass out – that, and offering prayers, and maybe a little hope.

His path across the city is broad, and the Back of the Yards neighborhood on Chicago’s South Side is my primary vantage point.

By now, the residents largely all know who he is, and often come running when they see him coming down the street, or call out from their windows, asking him to pray for them. Once upon a time, he stood between warring gangs shooting at each other, bullets whizzing by, risking his life. Now, they ask him for rosaries.

In an effort to neither whitewash nor sensationalize, I’ve taken care to attend to all those moments that, while difficult or simply mundane and easy to ignore, are also sublimely beautiful.

The Back of the Yards neighborhood, seen through a window of dandelions, in the spring. “Brother” Jim Fogarty visits with friends on the front porch. The neighborhood, extending from 55th street to 39th on the South Side of Chicago, houses about 50,000 people. Over half of the residents don’t have a high school education. It abuts the old Union Stock Yard (where it gets its name), which was the biggest livestock and meatpacking hub in the United States until the 1950s.

We’re on the 9th floor of the Dearborn Homes housing project visiting Joyce. She found out a few years ago that she has AIDS, but she learned that with the right medication, diet and lifestyle, it was not the death sentence it used to be. But recently she learned she has terminal cancer. This one she can’t beat. She called Br. Jim and asked him to help her go over some paperwork. “Final Wishes” planning guides. Where does she want her funeral? Who does she want to be the minister? Who will carry her coffin? She breaks down in tears, her body convulsing through the sobs. She leaves the room multiple times to collect herself. In a moment of quiet reflection waiting for her to return to the kitchen table, Br. Jim looks stressed.

An unlikely sight in the neighborhood: On July 11, 2014, a group of 47 conservative Mennonites from the Sharon Mennonite Church walked through Back of the Yards to sing to the residents and pass out free CDs. At first the residents looked confused and surprised to see this huge group approaching on the sidewalk, but they were all very glad to hear them sing. Some residents were deeply touched and shed tears.

Br. Jim meets with Angela, who struggles with food insecurity and doesn’t have a state ID. He goes over her mail with her in an effort to find the documentation they’ll need.

You wouldn’t normally find CJ in Back of the Yards. Typically he stayed in the Cabrini-Green row houses. But this day we found him at his sister’s. He was on house arrest, the ankle bracelet hidden beneath his jeans. Still a juvenile, but just barely.

It was his “last chance”. His sister out, he tended his little niece and nephew. As his niece bounded around the apartment, the baby boy lay on the couch. CJ sat near, messing with his phone. A typical teenager.

For a minute, the bottle, waiting, stood on the coffee table.

The young man on house arrest – his face reflected in the glass surface, itself isolated.

Over time I’ve grown terrified of my photos. They are things that grow and change on me, sometimes for the worse. Yesterday, this photo meant “juvenile justice system.” It meant “youth interrupted.” It meant “I made a mistake, but I still love, and I am worthy of love.”

Today, I look at this photo, and it looks back, differently. Today, it means vengeance. Retaliation. The cycle, unbroken.

One day since this image was taken, CJ was beaten, badly. I don’t know by whom, some rival clique. His friends rallied to his defense. One of the rivals shot dead. The balance sheet, squared.

And his friend in jail.

We bump into Delilah on the street just outside her house.

Delilah and her youngest, India, in the front room of their apartment in Back of the Yards. India has such a big, self-assured personality for such a tiny human. And she has one of the most remarkable, penetrating gazes that I’ve ever seen. She loves my camera, and was clearly performing, lollypop in mouth, watching for reactions. She and her tired mother quietly (tensely?) regard each other.

A little girl perched in the front window of her family’s apartment, mingled with the reflection of the trees on the street, smiling at us as we chat with residents outside her apartment.

An interpretive scene of Back of the Yards in the rain.

A teenager, Jeremiah Shaw, had been recently shot and killed on Laflin Street, just a week before this photo was taken at his sidewalk memorial. On the spot where he died, friends and family placed candles, empty bottles of alcohol, and they hung rosaries from the fence. Someone taped a selfie on the fence, one that that “Man Man” had taken of himself in a mirror, and printed it out on 8.5×11 computer paper. Someone had written “love none” on it in black Sharpie, vertically, in two columns. Although I’ve met many people on the block, including Man Man’s young cousins, I had never met him in person.

I hated that my first and only photos involving him were of his memorial and funeral. I didn’t feel comfortable taking pictures of him lying in his casket.

But I liked the idea that I could take one where it’s as though he’s looking right back at me — and at us.

Taking our image as we stare into his eyes.

And see ourselves different through them.

We followed the family and the gaggle of kids as they hauled chairs, bottles of water, balloons, Flowers, figurines and candles to where Juan has been buried since 2009. He was shot and killed after playing basketball in Cornell Square Park in Back of the Yards one night. His family came to honor the six-year anniversary of his death. He died when he was only 14. A little girl wore a t-shirt with his face, and the dates of his birth and death on the back.

Br. Jim holds the bottle of holy water he brought to perform a blessing at Juan’s gravesite on the anniversary of his death.

The family set up camp, and decorated their “Angel” Juan’s grave. They carefully watered the roses they’d brought before laying them down across where the years of his birth and death were carved into stone. Br. Jim prayed with them, said some words, blessed them all, and sprinkled holy water.

There was a moment when they were all in motion, paired up, about to begin–or in the middle of–or about to end and embrace. And in the midst of all this was Jim, his arm outstretched above everything, to sprinkle water over the gravesite. There was just something about that scene, that second, the way everyone was arrayed in time and space. It was an in-between sort of moment, but sometimes that’s when we really see things. 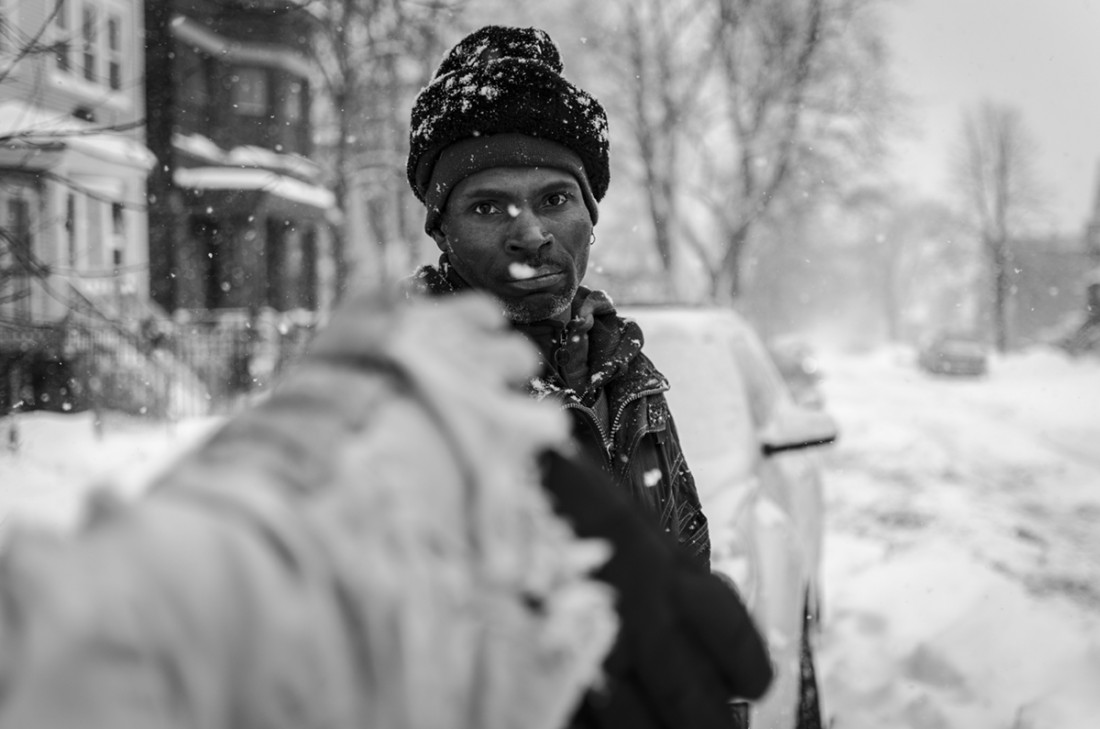 Winter in Back of the Yards. Br. Jim walks through all kinds of weather – the balmy heat of summer, the freezing cold, bitter winds and snow of winter. Here a resident is busy shoveling, but pauses to talk with us and accept a rosary.

The Chicago skyline at night as seen from the 9th floor of the Dearborn Homes.

To view more of Megan’s work, please visit her website.