Originally from Ames, Iowa, Stephanie Brunia currently lives in Oxford, Iowa.  She received a Master of Fine Arts degree from the University of New Mexico in 2012 and a Bachelor of Fine Arts from the University of Iowa in 2007.  Brunia has exhibited at venues throughout the United States including the Griffin Museum of Photography, the Center for Fine Art Photography, the Rayko Photo Center, the Rosalux Gallery, and at the Musee d’Elysee in Lausanne, Switzerland.  In 2011, Brunia was selected as one of three artists featured in the Des Moines Art Center’s annual Iowa Artists exhibition.  In 2016, she was included in the Sioux City Art Center’s SCAC Selects exhibition.

My work often deals in the intangible space of interiority– loss/absence, intimacy/connection, and an understanding of self through the examination of another. As a photographer, these subjects become challenging in part because they cannot readily appear before a lens. Therefore I find myself finding ways to breach the void between the tangible language of photography (surfaces, bodies, spaces, light) with the visually intangible experiences I seek to make work about. For some time now, I have crossed this void through a performative approach to photography. In The Space InBetween, I used staged bodies smooshed together to speak to the awkward dance of intimacy—of attempting to merge with/be seen by/to see another individual. In Thursday’s Child, I use gesture to explore my anxieties about my father’s aging. In one photograph I wrap my hair across his face—an abstract gesture that at once speaks to the notion of wanting to shield and protect him while also visually obscuring him.

I have found that inspiration often strikes in the quiet moments that reveal a small fissure in my perception of my reality—a fissure that begins to grow and forces me to see my reality anew.  These moments are personal and pertain to my own lived experience, but my hope is that, when distilled and broken down, they pertain to a more universal human experience.  In many ways I photograph that which is impolite to talk about openly—the work becomes my way of confessing my experience in hopes that it strikes a nerve with others.

Hello Stephanie, can you speak about a personal experience or memory that lead you to create “The Space InBetween”?

I created this work in response to a personal situation that I was attempting to reason and digest—a failing relationship that I was trying to understand.  I frequently turn to photography to explore my fears and anxieties—performing them for the camera becomes a way to see them and ultimately face and understand them. In many ways, it is easy to say that that The Space InBetween is simply about the narrative of a failed relationship of two individuals.  However, I have always seen the work as an attempt to acknowledge my desire to feel close to another—that very fundamentally human motivation to be understood, known and valued.

This work takes two conflicting approaches—one absurd and one rather earnest. The absurd approach acknowledges the comical nature of human desire—the repeated attempts to make connections despite evidence of an incompatibility.  Gestures are deliberately repeated in the work, alluding to the cyclical (and at times stagnant) nature of many human interactions.  The earnestness of the work comes in the moments when I look out from the scenes, inviting the viewer in through my gaze.  It could be argued that the connection I am seeking in the work isn’t with my fellow subject, but rather is my attempt to have the viewer see me in the photographs—to see my loneliness. That invitation becomes both a challenge and a confession.  Even now, it makes me feel uneasy to admit that the work has a component of loneliness.  To admit to loneliness is a rather vulnerable state and I think I was making the work in order to offer that vulnerable self and open that conversation.

I really admire the collaborative nature of this project- can you speak more about the process of creating your photographs?

The choice of the word ‘collaborative’ is interesting.  In order for the work to be collaborative, there would need to be components of the work that were directly influenced by another and I can’t say that any of this work falls under that category.  It’s true that I worked closely with another person in the creation of the images, but the images only speak to my experience.  I would never go so far as to claim that they speak to anything beyond my experience.

Many of the images were vaguely sketched out ahead of time and would evolve during the shoots.  There were numerous times when very little was said between us as I would rework our positions in order to find the right gesture.  I was most interested in giving a lot of physical weight to our bodies—exaggerating the smooshing, the colliding, and the touch.  I was also seeking moments that were ostensibly sexual (a nipple in the mouth, a head in a crotch, etc.) but ultimately lacking the energy of desire.  This meant a lot of back and forth between the operating the camera and performing for it.

In your statement, you discuss the moment “where bodies fail us.” What do you believe is the redemptive quality of “The Space InBetween”?

With this project, I was consciously limiting my vocabulary to bodies and stark spaces which, aside from time and light, have become the raw materials of my photographs.  I liked the challenge of having to speak to a complex idea using these limited elements—casting the body as a metaphor for the intangible desires of the self.  We understand that we are a combination of an external and internal self and that the body cannot always easily translate/transmit the internal self.  Yet due to the limited means of a camera, which can only capture that which is physically before it, the body becomes the photographic identifier of the self.  It became an interesting exercise to then use the photographable self (i.e.—the body) to convey the unphotographable self.   All that to say that the redemptive quality of the work lies in the deadpan bodies—a reminder that the self is more than the body—the self is the entity that desires the connection and the body is simply the vessel.  And yet, on another level, in a broader sense, the largest redeeming quality of the work is the repeating gestures—the continued attempts at connecting despite the evidence of it failing.

Can you speak about physical closeness in relation to the domestic space, and how the presence of these objects elevate your photographs?

The photographs exist in a domestic space because I wanted them cast in an intimate and private context.  The bodies are the true subjects; the domestic space is merely a stage that elevates the gestures of the figures.  I purposefully stripped my scenes down to a few props—some furniture, sparse walls and natural light—so as to have a domestic scene that didn’t draw too much attention to itself.  The most effective props are the cotton briefs used throughout the series—their superfluous nature proves farcical. 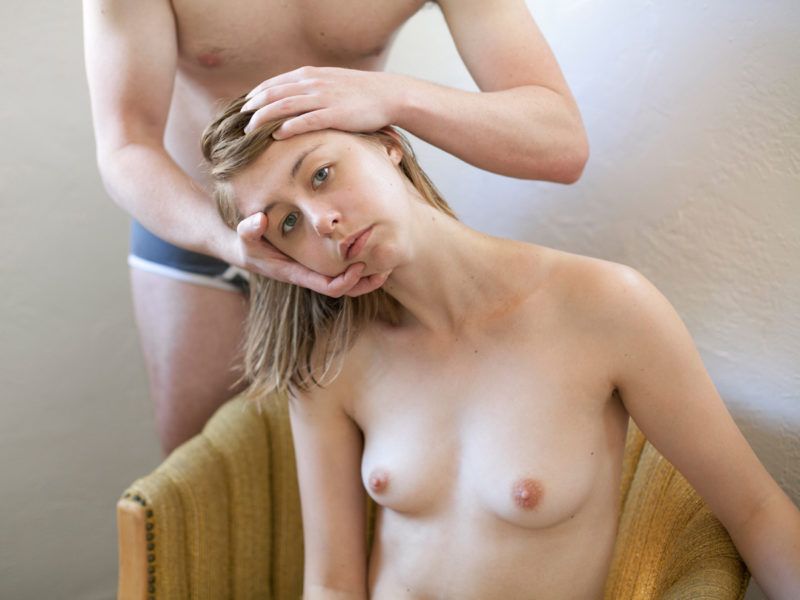 How has making this body of work challenged or changed the way you perceive human intimacy?

I’m not certain that this work has changed my perception of human intimacy, but it has afforded me a way of engaging in a conversation that I had largely avoided prior to these images.  As a fiercely independent individual, I always found it difficult to talk about my desire for closeness with others. Attempting to reconcile the autonomous self with the self who desires an intimate connection with another is the heart of this work. Too frequently I associated the desire to connect to others as a character flaw. Having grown up in a “soulmate” culture, I found there was little room for conversations about how difficult, nuanced and scary intimacy can be. I don’t think there are enough people talking about connection—and I don’t even mean simply Romantic connections—I mean the work required to bare oneself to another—I think many people spend their lives avoiding that level of vulnerability.

I understand that you are also in the middle of making a new body of work, “Thursday’s Child”. How is this new series informed by “The Space InBetween”?

Aesthetically Thursday’s Child looks quite similar to The Space InBetween—it focuses on the gestures of the body in emptied domestic spaces that are bathed in natural light.  The new work is largely a continuation of the conversation I began with The Space InBetween, however, it focuses on a very different relationship in my life: the relationship I have with my father.  The Space InBetween was about the anxiety of seeking intimacy and connection with another, whereas Thursday’s Child focuses on my anxiety regarding the temporal nature of a relationship I already possess.  Except, in the newer work, I think I’m more willing to say that the work is about love—it’s about a love that is foundational to my understanding of myself.  It’s about the fear of one day losing him and having to navigate the world without his presence.  It’s about looking over and realizing that he is not quite old but no longer young.  It’s about understanding that the incremental moments of time are having their effect and I intellectually know the outcome, but it’s another thing entirely to now feel it creeping closer—may it take awhile.

You are invited to view more of Stephanie’s work on her website.