Natalie Krick (b. 1986) lives in Seattle, Washington. She received her BFA in Photography from the School of Visual Arts in 2008 and her MFA in Photography from Columbia College Chicago in 2012. She has recently exhibited at SOIL Gallery in Seattle, Webber Represents in London, Aperture Gallery in New Yorkand and at the Colorado Photographic Arts Center in Denver. In 2015 she received an Individual Photographer’s Fellowship from the Aaron Siskind Foundation, and was recently selected as a finalist for the 2017 Aperture Portfolio Prize.

Self portrait as my mother’s mother

My mother, my sister and I perform for each other, for the camera and ultimately for you.  In the harsh revealing light of the flash; we pose, we masquerade until our unstable identities begin to merge.  We impersonate each other and ourselves, emulating imagery that has taught us how to be beautiful.  The resulting pictures, portraits and fragmented photographs of our stylized bodies, mimic the alluring glamour and artifice found in magazines while mocking the idea of being easy on the eyes.  In the act of embodying these tropes, cultural cliches become personal, pointing to the way photography influences the fantasies and fictions we have created about ourselves.

My photographs are fueled by my conflicting attraction and aversion to images of glamourous women. I am fascinated with perceptions of the sexualized body and the intersection between the ubiquitous and the taboo nature of sexuality. I photograph to portray beauty as artificial, flawed, threatening, psychological, seductive and garish.

Mom on her carpet

Hey Natalie, thanks for taking the time to speak with us about Natural Deceptions. How do you think cultural standards of beauty made an impact on your childhood and your mother’s life?

The importance of beauty was imposed on my mother by her mother. My mom remembers painful up-dos and never feeling pretty enough. As a young child I remember wanting to look like someone else – someone with curly blonde hair and pink lipstick. After my many requests for a perm were denied (phew) I ended up losing interest in my appearance until I reached my teenage years. I think at this point – my body and my image began to consume my thoughts.

Mom in her pond

Was there a critical moment in your youth where these expectations influenced your current practice?

During the summer when I was a teenager my cousin would stay with my family and every year and we would have late night photo shoots in my bedroom. We would dress up and photograph each other while this fantasy about becoming famous and beautiful lingered in the back of my mind. When I look at these awkward photographs now, the gap between how I longed to look and how I actually appeared is painfully and hilariously obvious. [Diane] Arbus explored and wrote about the gap between intention and effect in relation to one’s appearance and I am very obsessed with this notion especially in portraiture. I also love the idea of the ordinary impersonating the glamourous.

There is a tendency for both parents and children to deny, or have difficulty, perceiving one another as sexual beings. Can you describe the deliberate sexualization of yourself and your mother in your process?

I think of the deliberate sexualization in my photographs as more of a performance mocking of the way bodies are stylized and posed to appear sexual. The sexualization and consumption of the female body makes me uncomfortable. My own gaze does not cause the discomfort but instead I am uncomfortable with being looked at in a certain way.

Hillary and Mom and our hands

How has your relationship changed with your mother since making this body of work?

I’m not sure if our relationship has changed due to making these photographs but we did get to spend a lot of time together. I moved home to Colorado and in with my parents in the middle of making this work. My mom doesn’t particularly like being photographed so I am really grateful for her participation.

My mother in bed with roses 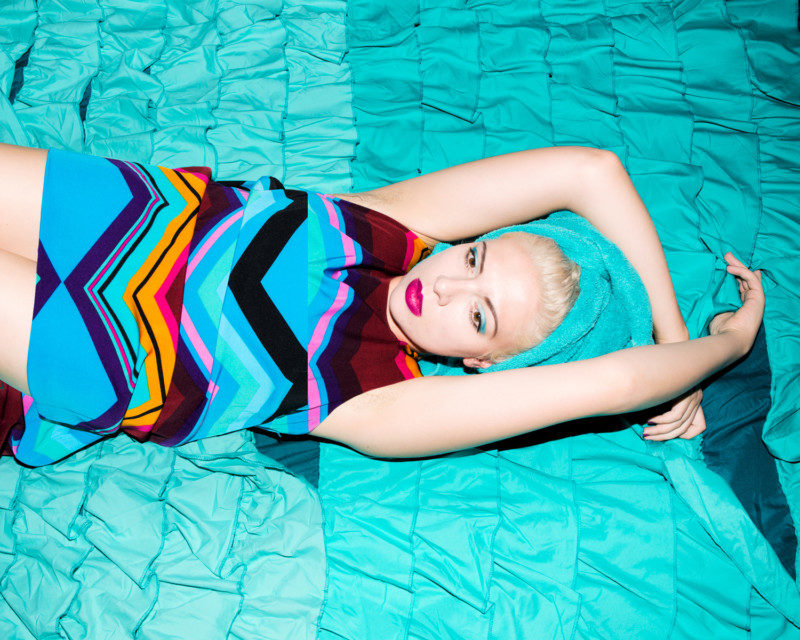 Many of your images use magazine and print material to manipulate the female body. Can you speak more about this transformation?

I look at a lot of magazines – I have a collection of Playboy magazines from the 1970’s and I’ve spent a lot of time hanging out in bookstores absorbing the poses in women’s magazines. I’m always hunting for images to steal. I was making collages and then I began to physically insert the magazine clippings into the photographs. Placing cut up paper and images from magazines in front of the camera is another layer of manipulation. It’s a visual tool that makes the final image somewhat confusing to look at and it juxtapose images that induce desire with my own body and my mother’s.

My head on mom’s shoulder

You work is immensely critical towards notions of femininity in the media, but the women in your pictures also evoke a sense of vulnerability and concern. What personal and cultural changes do you hope to achieve through this body of work?

I want to be critical about these notions of femininity while also poking fun and basking in the colorful seductive quality of images. When working on this project I wanted to create images of my mother and myself that were complicated and not just easy on the eyes. I want to see more images of older women, I want to see them in movies and tv shows and I want my photographs to contribute to this visibility.

To experience more of Natalie’s work, please visit her website.