Jay Wolke is an artist and educator living in Chicago, Illinois. His photographic monographs include: All Around the House: Photographs of American-Jewish Communal Life, 1998; Along the Divide: Photographs of the Dan Ryan Expressway, 2004 and Architecture of Resignation: Photographs from the Mezzogiorno, 2011. His works have been exhibited internationally and are in the permanent print collections of the Whitney Museum of American Art, New York MOMA, the Art Institute of Chicago and the San Francisco MOMA, among others. His photographs have appeared in numerous publications including The New York Times Magazine, The Financial Times Magazine, Geo France, Exposure, Newsweek, Fortune, and The Village Voice. From 1992-1999 he was Coordinator of Graduate Documentary Photography at the Institute of Design, IIT. In 1999-2000 he served as Head of Art and Graduate Studies at Studio Art Centers International, Florence, Italy. He is currently a Professor of Photography at Columbia College Chicago, where he was Chair of the Art and Design Department from 2000-2005 and again from 2008-2013.

When I made these photographs in the late 1980s and early 1990s, Las Vagas and Atlantic City were the centers for legal gambling in the United States. Devoted to games, spectacles, and temporary diversions of all kinds and representing the ultimate immoderacies of American consumerism, these cities were designed to be architectural seductions, tapping the collective thirst for risk and reward. Still under the influence of underworld kingpins, Las Vegas was fueling the needs of dream-seekers while utilizing a huge infrastructure of resources and hundreds of thousands of workers. It was the fastest growing city in the country. Atlantic City was trading its worn out, seaside image for modern gambling and convention complexes, displacing thousands of local residents in the process and hoping to turn around the fortunes of the city and the state.

Especially appealing to me were the peripheral associations, which enriched an already complex, social, and physical structure—i.e., celebrities, prizefights, prostitution, beauty pageants, weddings, and so on. As a photographer, I was fascinated with the accentuated layers and intersections of people, artifice, architecture, and landscape. I was searching for circumstances charged with expectation and aspiration, stirred by fantasy so that, through my photographs, I might then strip away those expectations, exposing the symbols of desire alongside the realities of pretense and uncertainty. In doing so I was hoping to construct images of visual and psychological tension, mirroring the complex processes that contrast imagination and reality.

This volume is both a time capsule and an index of the contemporary, addressing themes that are every bit as acute today as they were when I made the images decades ago. Revisiting my archive of negatives now has necessarily suggested a different appreciation of the photographs; many, originally ignored or rejected have found their way back into the body of the project, and now command a new edit. This process of reconsideration and reflection has been extremely rewarding on many levels. Both hindsight and experience have given me fresh angles from which to view this work and to finally reveal the story that I’d always hoped to tell. 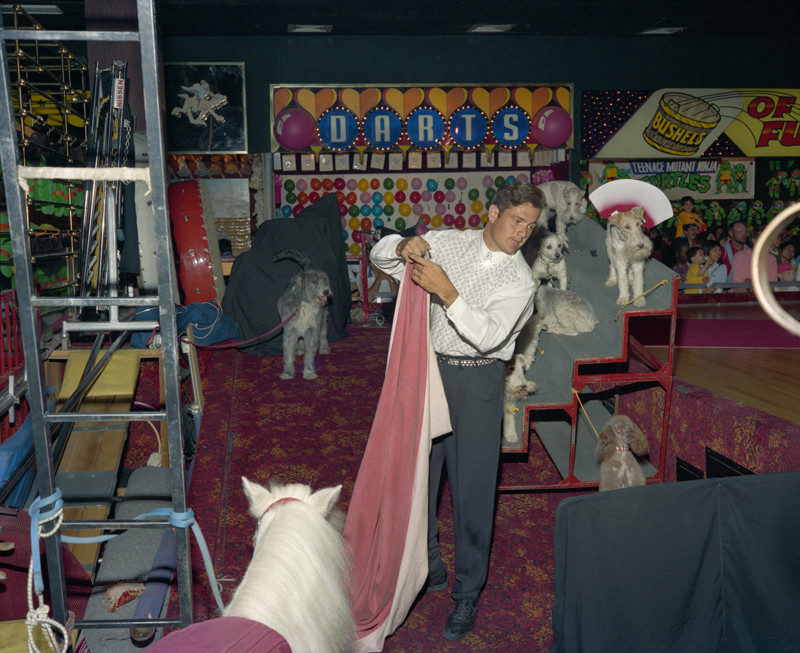 In your statement for “Same Dream Another Time”, you write that you were “searching for circumstances charged with expectation and aspiration”. Can you explain how the parallels between your personal aspirations and the desires depicted in your imagery correlate?

If you’re asking whether I had a personal interest in gambling or other activities identified with Vegas or Atlantic City, I really didn’t. But, I did have a huge fascination with the influences of architecture, semiotics, advertising and personal fantasy on the visual landscape. This project was actually a subset of another, which dealt with how public events and public spaces can enable people to display personal expressions and behaviors. The long title was “Social Buffers and the Temporary Use of Public Space”, the short title was “Temporary Usage”. I imagined that by going to entire cities devoted to temporary usage, I would better understand the junctures of public and private– cities designed and calculated to incite desire and reassure people that indulgence is good and might even be rewarding.

My aspirations as a photographer have always been to use the medium to learn about the world, and to make images in ways and substance that I’ve never seen before. I take visual risks and will go most anywhere, or into my studio, to experiment with new strategies of picture making. One of the rewards of this approach is the freedom to be as curious and visually probing as I choose to be. Unfortunately, it’s also the reason my work is hard to pin down. My interests are very broad, both in subject and technology.

As I look through your imagery, it seems as if the people are visually and psychologically minimalized by their ideas of wealth and spectacle- the promise of fame and fortune is always omnipresent. Can you elaborate upon these ideas?

The onslaught of artifice and staging both reinforces and subsumes the desires of the visitors to these places. John Berger might have called this the “public subjective”– advertising and promotions (signs in general) attempting to co-opt the personal subjective (individuality). We like to mythologize ourselves, dressing and behaving like the characters we wish we could be, in the spaces we imagine them to be. The places I photographed were perfect stages for people to act out those illusions, and as an image maker, this intersection between internal and external, reality and fantasy, demonstrated an incredibly rich, layered iconography, perfect for visual scrutiny.

I do think, however, that there was a substantial difference between the behavior of visitors versus that of residents and, subsequently, the way they are portrayed in this work. I think residents displayed a more resolute determination and resignation to the realities of living in these capricious places– their lives are tangible and hard.

Visitors, though, are living the dream– their ambitions were more illusory and subject to the temporary fantasies offered by commercial and cultural seductions. While people liked to think that they were determining their own destinies, they were actually being buffeted by outside influences. It’s the disconnect between psychological interiority and exterior materiality that drives many of these images.

After creating a body of work that focuses on the more superficial elements of the human experience, what did you find to be the most sincere aspect of these photographs?

I think the sincerest elements of these photographs are the people portrayed. My entire thesis was that they would continue to reveal something “true”, despite the environmental hyperbole. I think it’s the ambiguity between the superficial and the elemental that drives these pictures. Internal consciousness vs. commodified desire.

In consideration of the current political situation— most specifically, a reality TV mogul taking on the role of President of the United States— how do you think the meaning of these images have changed since creating them in the 1980’s and 90’s?

In 1989, when I photographed his casino as an element in one of my Atlantic City photographs, Trump seemed a distant and laughable tycoon who could barely keep his financial head above water– despite the fact that casinos rarely go bankrupt. Now, when I see his name I reflect on an ever-present danger to our world, and am at a loss to understand how we were taken in by this grifter. Like most charlatans, however, and rather symbolic of the swindle that defines the gambling industry as a whole, it was Trump’s abilities as a con-man that convinced people to vote for him.

As a young man, I thought our culture might be able to extricate itself from the excesses of capitalist consumerism. In Same Dream Another Time, the dream that I tried to expose thirty years ago has exploded into a condition that now circumscribes American life as an all-consuming gamble which people seem to be willing to take. – a condition that hasn’t resulted in any sense of equanimity, but has created a deepening gulf between rich and poor.

How do you feel that “Same Dream Another Time” has informed your current creative practice?

Almost all of my documentary projects have centered around large systems or social structures in which people and environments are shaped, and often dwarfed, by the larger causes and effects of their surroundings. I’m currently working on several projects, including large format photographs that examine the elaborate set of physical, social and political structures that have shaped the architectural landscape of contemporary Italy. In my last book, Architecture of Resignation, I examined this subject as it manifests in the south of the country. Since 2008, I have been exploring other parts of the country, as well. I’m also deeply involved, in a creative and an administrative role, in CPS Lives, an extensive project involving many photographers, artists, writers and filmmakers that are documenting various facets of life in and around the Chicago Public School System.

To view more of Jay’s photographs, please visit his website.